Mountains, Miracles, and Pat Metheny – From My Heart

Last Wednesday evening I was at a Pat Metheny concert in my hometown of Boulder, Colorado with my sweetheart, Amy. Pat was playing at the historic Chautauqua auditorium – an amazing venue. Amy got the tickets for my birthday last month. I was so excited!!

Here’s a picture of the outside of the auditorium: 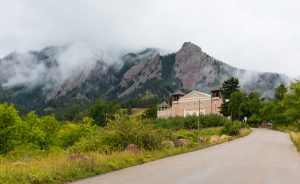 As the concert opened I felt so much emotion wash over me. Pat has been playing the soundtrack of my life since I was a teenager. I remember buying my first PMG (Path Metheny Group) album at a Music Warehouse store at the corner of Pearl and 28th street in Boulder – it must have been the summer before my senior year of High School. I was with a good friend of mine who suggested I get an older Pat Metheny album. Instead I chose “Still Life Talking” and I’ve been listening to that – and many other albums since.

There’s something deeply spiritual about music for me. When I played trombone I felt connected to a part of me that I couldn’t express with words. Sometimes I cried when I played. I remember playing in a contest with my HS jazz band a short time after a very close family friend had passed away from cancer. I was playing a solo and I closed my eyes and just let all my emotion and love for Bob pour out through my horn. It was a powerful moment.

As I was watching Pat play on Wednesday evening, I was remembering significant moments along my journey from the first time I heard him to now. Sometimes the same song – sometimes something very different. Always Pat. And to sit and watch and hear and feel him play with the other three … something profoundly spiritual was going on. For me – and for the four of them as well.

Here’s a picture of the inside of the venue. It was built in 1898 and feels like an old barn inside. 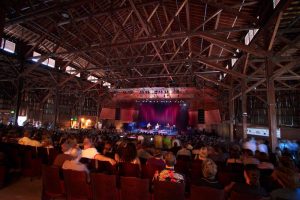 Watching musicians of that caliber play live in-person feels like a miracle to me. The fact that Pat was one of the four confirms it:

Towards the end of August, I went up into the Colorado mountains, to a monastery near Aspen that I’ve been blessed to be able to visit on retreat the last four or five years. It was an extraordinary trip and retreat on so many levels.

Wonderful to have time in such a beautiful place. No cell phones, no internet … no distractions. Just the gift of God’s presence in me – and whatever noise was ready to leave me so I could open to a deeper experience of myself, and more fully honor the call coming back home.

Here’s a picture from the last day of the retreat: 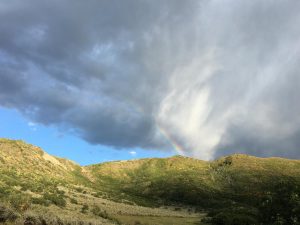 I went with the idea I might be called to work on my book. I even downloaded everything off the cloud onto my laptop in case I was right – and writing was what I was called to do when I arrived. The first full day, I sat down to meditate – and in came this idea to write my book. I tossed the idea over my shoulder – clearly it was my ego jumping in with an idea. Several minutes later again – write the book. Again I tossed it over my shoulder. This happened three more times before it finally occurred to me that this might actually be Divine guidance. Three more consecutive points of guidance (including images of me writing, chapter titles, and a small movie of me getting out of my chair and walking to the desk, opening my laptop and beginning) later and I finally realized – this is real!!

For the first time since I first went there, The guidance I got ahead of time was exactly right. I wrote and wrote and wrote – nearly 60,000 words of writing and reworking and refining. A free flow download and dance with the Divine.

Miracle number two … in the mountains.

When I returned home I had one day between returning and an advanced small group retreat that I was facilitating for a couple of my most advanced students. We got to spend a week together – and so many miracles came into my awareness and experience during that week.

On the second day of the retreat we went deep as a group – and I found myself the recipient of a series of downloads about retreat centers. They were showing up on a map of the world – the first one just West of Fort Collins, where I live. The second in the Caribbean – the third on Flathead lake, and so on – until I saw the entire globe with lights around the world for each retreat center.

Many times I ignore Divine guidance – but I never ignore Divine Downloads. That’s how I received Beneath the Sand – the call to begin working with messengers in a more focused way with the Embodied Messenger Experience – and so many other things over the last nine years.

I shared what I had seen and received with the others on retreat. One suggested we go plant energetic seeds for the retreat center. The next day we all hopped in my truck and drove up the least traveled canyon heading up the hill out of Fort Collins. Within 100 meters of the mouth of the canyon my entire body started buzzing. Ditto for the two who were with me – and their body’s had never buzzed like this before!

We stopped by the side of the road and meditated and did our thing before continuing up the canyon. The buzzing diminished the higher we went – but the views were more and more amazing!

We went down the back of the first hill – and turned left (more resonance that way). After a while we all started buzzing again – so strong that we pulled off the side of the road and stayed in the car and did our thing. We tried to turn right on the next road – but it was a private road. Next turn we started buzzing again – this time the strongest yet. We went a short distance, stopped and got out to mediate and do our thing.

We continued up the road – it turned into a canyon with the most amazing views and vegetation I’ve ever seen in this part of Colorado. It was a place I’ve never been before. We drove and drove and drove. More resonant with each passing mile. A creek by the side of the road. Silence. Peace. Beauty beyond imagination. And resonance so significant we wondered if we would be levitating the car if we continued!! All the while planting energetic seeds.

Here’s a picture from the canyon … 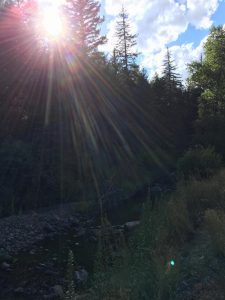 Did we find a plot of land for sale, and trunk full of gold to buy it? Not yet. But that’s not the point for me. I feel the call of a retreat center – whether it’s up this canyon, off the grid in a place of deep peace and beauty under the continental divide – or somewhere else including simply in my mind – it’s in my awareness and my field now. And that’s amazing!

Miracle number three … in the mountains.

The weekend following the retreat I was goofing around on eBay looking at sound boards. I’ve long had a dream that some day I’ll have a recording studio. I used to think it would be a world class studio somewhere in the Colorado mountains and I would invite the artists I love to come record. Including Pat Metheny. 🙂

There was a sound board I’d seen for sale a month earlier. It came out of a well known music venue in Denver from the late 70’s and 80’s – and though I never mixed a show at that venue on that mixing board – I worked on the same model mixing board many times during my career as a sound engineer. When I first saw the console for sale it was listed at a price that made sense logically – but it was more than I wanted to spend. “ohh well” I thought at the time – it’s too big – don’t know what I’d do with it right now, anyway.

Here it was the Saturday following the two weeks of miracles on retreat – and there’s the board again – but this time it’s being listed for WAY less. I email the seller (who is in Denver) and ask if there’s any way he’d accept a lower price – figuring if the price came down to $100 less – I would buy it.

I couldn’t sleep that night. Was awake in bed imagining all the wonderful things I would do with this sound board if I could buy it. Amy went to sleep around midnight. I don’t think I fell asleep until close to 2 I was so excited.

I woke up on Sunday morning and checked my email – nothing. For some reason I refreshed the screen – and shazam!! The price had come down by $100!!! I couldn’t contain myself. I bought the board on the spot. There’s an amazing connection with the guy who sold me the board – grew up in the same town – he’s a professional musician – and so much more.

I told a long time client and friend the story of getting the board – and she asked: why was he selling it. I explained that his father had to go into an assisted living home – so he had to make room for a house full of furniture so he could rent his dad’s place. She said: “Do you hear how bizarre that is?” Not getting it I asked her what she meant. She said: “It’s as if that board was meant for you …”

It’s been an amazing experience of exploring, daydreaming, imagining, playing, and dreaming some more in the weeks since I received the sound board – and in the days since watching Pat play. My first gifts from the music world as a sound engineer seem to be coming back to me to find expression, in a way that only could have happened by a series of miracles. Who knows what will happen next … but this I do know: Miracles are blossoming around us all of the time, if only we take time to get quiet, listen, and follow the guidance … even when it doesn’t really make much rational sense.

I’m thinking this movement we’re in now through the end of the year is a very powerful time for all of us in this community. Whatever else is happening in your life, don’t forget to take time to dream.

Here’s to the dreams of your soul blossoming into awareness and experience, in your life!!