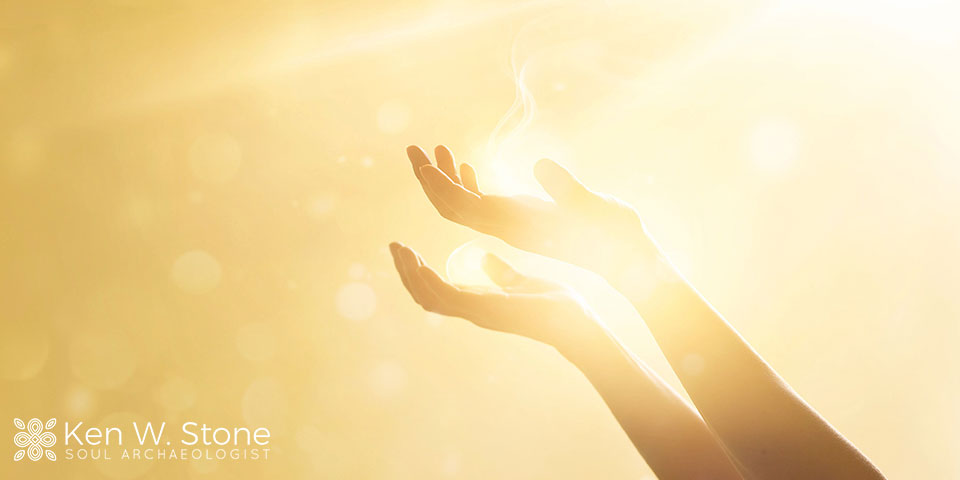 I’ve been doing a lot of reflecting over the last week. This is the first year I haven’t done the 4 Days of Healing event – either at the end of the year or at the beginning of the New Year. It’s given me time to be with myself at the close of the year in a way haven’t in a long time (not since 2010 – when I was leaving my career in mortgage lending behind and stepping into the unknown of making a living sharing my spiritual gifts).

Today I’ve been thinking about all the ways I could have interpreted the inputs I was receiving differently as I’ve moved through my life since this time nine years ago.

For example – I was afraid to go to the in-person meditation retreat in September of 2007. Had I not gone out of fear, I wouldn’t have shared time with Lin David Martin – the man who told me “you should be working as a healer” at the close of that retreat.

Or when I began sharing my gifts with others in January of 2008 and my hands and feet started tingling and buzzing – I took that as a sign of the gift revealing itself to me. What if I had gone to see a medical Doctor? Perhaps I would have been diagnosed with neuropathy.

Or the therapist I was seeing in 2008 – who, when I started telling him about this new healing gift that I was beginning to share with other people around the world, responded: it sounds like you may be getting into magical thinking and suffering from delusions of grandeur. My response was to stop seeing him immediately.

Why do we respond to circumstances and stimulus in the way we do?

Earlier in 2007 I had a financial services workshop I had been conducting several times a month for almost a year videotaped and turned into a DVD. I wrote a book in support of the DVD – and launched a website to sell both. My then-wife Laura had suggested doing this as solution to the challenges I was facing at the time of filling my workshops with people from Northern Colorado. It was an idea I resisted initially. I’ve long resisted good ideas initially. I still do. 🙂

The DVD launched about the time I went to the retreat in September. In the months and years that followed I spent a lot of money chasing the dream of an “infoproduct” – something that’s sold online on its own website, that creates a passive stream of income. A brilliant idea initially, I pursued it to a point where it was no longer supportive or helpful and ultimately we declared bankruptcy and went through foreclosure.

In August of 2010 just as the bankruptcy was discharging – I decided to launch my first commercially focused spiritual website – to see if I could earn my living sharing my gifts. There’s a long story in there – but the shortcut is that after several years with some pretty big spiritual lessons (the biggest of which was – and IS – surrender) I was able to make a living sharing these gifts God has given me.

My sweetheart Amy asked me sometime in 2012 – “how did you know it would be different?” – referencing the difference between this business and the failed business of my financial services DVD and e-book. My answer: “I didn’t. In both cases I just knew. I was wrong the first time – I was right the second time.”

I think the more complete answer as I reflect on it now is that I could feel the truth in my body – but that’s not an answer that has any meaning to anyone other than me. I guess that’s how it is with the truth. It’s an inner journey, isn’t it?

How do you follow your knowing in your life? How do you know? Do you feel it in your body? Do you see it? Do you dream it?

2016 differentiated itself in my life by being a year full of deep, embodied clarity.

The clarity I started the year with came to me as I moved back inside and reconnected to myself and the Divine within me as the source of my true path. I got lost late in 2015 and early this year – looking outside myself for the true path. It’s been a pattern with me this movement outside – then back inside.

After turning inward around March, I spent the next three months ignoring what I thought was my ego directing me to serve a larger audience. When I finally got fully present with the guidance it turned out to be the pathway to embodied union – and I got one of the biggest surprises of my life: Embodied Union Consciousness that came with being fully present with the guidance I had been dismissing. The Divine path is always deeply resonant, if not a complete shock from time to time!

Over the summer I honored the nearly daily downloads related to a curriculum in support of Spiritual Messengers by launching a new series: Spiritual Messenger Mastery I, II and III. Level three began in December – and that circle is moving into an extraordinary place as we begin the New Year. One of my great joys is witnessing messengers as they step into their unique gifts, message and Divine mission. It’s amazing!!

With these downloads, came the clarity of a beginning – a starting point for new people to this work – and a next step – and then another next step. A gentle ramp through Spiritual Mastery – eventually into Spiritual Messenger Mastery. I explained it to a good friend a couple of weeks ago and he exclaimed: “I understand it all so clearly for the first time, Ken!” I think that’s how it is for messengers on their true path. We’re uncovering something buried deep within – in a place no one has ever visited before. Even those who have found it within themselves can only cheer us on – for their path to uncovering these extraordinary gifts within was their path. Their success can inspire and encourage us – yet we each must discover our true path for ourselves.

2016 has given me a lot of clarity about my true path – and from this clarity is a new event I’ll be sharing with you in January called The Resonance Experiment. I can’t wait to share this with you and connect and grow once again as a community!!

From this clarity, I’ve focused the last few months on connecting with other messengers with whom I’m in deep resonance. Old friends – though we’re connecting again for the first time in this lifetime. It’s been amazing to hear and feel and be in the resonance with these amazing people! I can’t wait to share more about these messengers with you in the months to come as we launch into 2017!!

Note: The first one I want to introduce you to is Kenji Kumara. If you don’t know him yet it’s time. If already know him – here’s a great opportunity to reconnect. Kenji is doing a free New Year’s meditation this coming Monday (the 2nd of January, 2017). Join him for this – it’s a wonderful opportunity to connect and explore the resonance with him – as you accelerate into the New Year! Here’s the link to Kenji’s New Year Meditation event (free to sign up of course).

Here’s to new openings into the embodied resonance that lies within you and everyone one of us on the planet. No matter what you’ve been through – no matter your struggles or successes – no matter how much you knew but were wrong – and no matter how much you knew and were right – here’s to the experience of the manifestation of God’s unending love for you – within you, experienced with each breath – opened to in each moment – revealed through each cell in your body and through each expression of the Divine above, upon, and within the planet!

Here’s to an extraordinary New Year!! The most amazing, yet. Deeper, more expanded, more embodied, full of resonance on every level you know of – and in all those ways you have yet to open to or become aware of … further into the mystery – all the more extraordinary with you!!

In Divine Love and Peace,
Ken